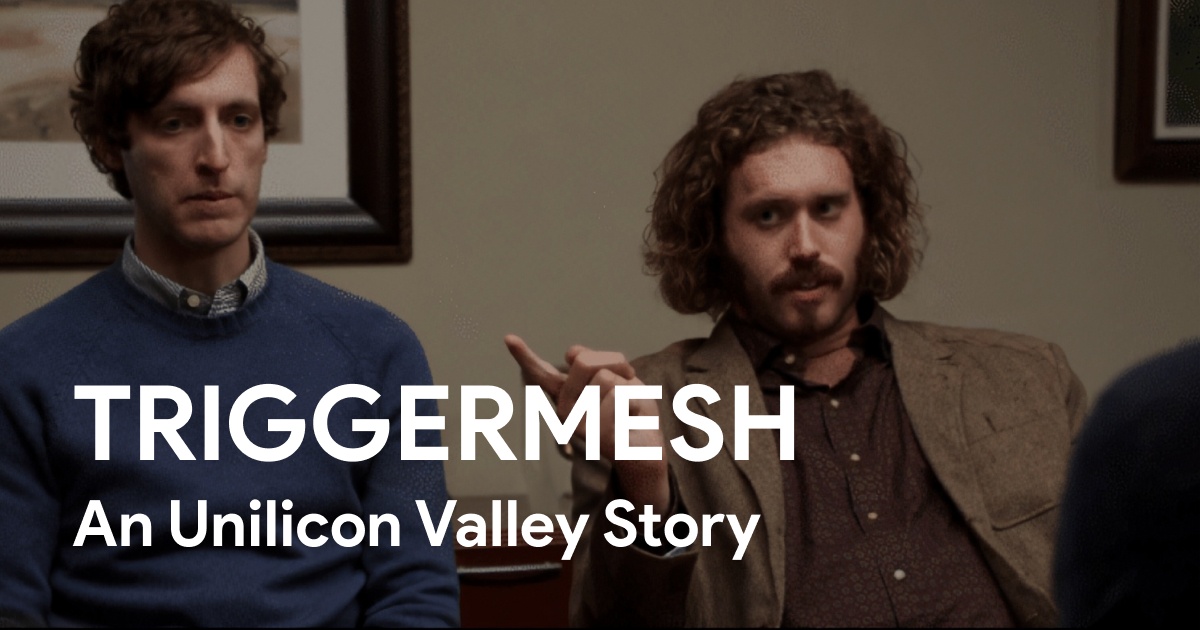 It’s been a rollercoaster ride since starting TriggerMesh in September 2018. Sebastien and I had been speaking for some time about doing our own software company but it wasn’t until the summer of 2018 when we decided we wanted to solve what we foresaw to be the impending issues with cloud native technologies. We knew that we were early to market but felt like we wanted to be first so we started on one of the most fulfilling rides of our career along with a dog named Woodford, a programmer named Tuna, and some other folks that were critical to giving us our start.

Our Culture, Our Goals

As colleagues in a big multi-billion dollar company, we had seen the benefits and downfalls of working for a behemoth and became confident that we could do something great on our own: build a company with a great culture, innovate and push our industry forward.

Along the way, we have had a great time and learned a lot. We also have made hundreds of Silicon Valley (the TV show) references too. It’s not one hundred percent accurate but some might say Sebastien could be a French version of Richard and I might be mistaken for a balding version of Erhlich. However, despite the jokes we are very excited to be able to build a company that extends well beyond Silicon Valley. .We want to have the opportunity to hire the best engineers and have customers that are not only in the technology bubble of Northern California find their way to cloud computing with ease.

Like the popular HBO show, we are a bit quirky. Sebastien asks every question four times and I get extremely grumpy when doing financial paperwork. We have a Chief Canine Officer and we even started a drinking game (coffee or adult beverages) where we drink every time we hear the word, “hypothesis”. We believe that work doesn’t have to be dull or boring. We want to make TriggerMesh a fun place to work and an enjoyable, useful product to use.

As cloud veterans with a front seat to the industry we were keenly aware of the changes brought about by the widespread adoption of containers, Kubernetes, and serverless. At his previous start-up, Skippbox, Sebastien started to delve into Kubernetes management as an author, instructor, and solution developer in Kubernetes management. He architected and co-wrote one of the first serverless frameworks, Kubeless and kompose which sits in the Kubernetes incubator As the executive director of the Node.js Foundation, I saw the growth of JavaScript on Amazon Lambda as everyone from iRobot to Netflix was seeing huge benefits from serverless infrastructure.

One thing we agree on for sure, we knew we needed to skate to where the puck was going not where it was. So Sebastien, a lifelong researcher who had helped prototype cloud computing infrastructure for CERN while at Clemson University, started to think deeply about where serverless was going and started to anticipate the needs of a fast-growing and evolving industry.

What became clear is that the future isn’t necessarily limited to serverless or microservices or even a single cloud. The real need is for integration between cloud services. This has informed our decision to focus on building a cloud native integration platform. If we had to choose one of those analyst defined categories, we’d probably fall into the integration-platforms-as-a-service or IPaaS, market:

Though we aren’t much for labels. We see this as an industry that has conquered the data integration piece but has a long way to go in defining application flows, especially when it comes to cloud native integrations.

Over the lifetime of TriggerMesh, we have spent a great deal of time speaking to the venture community. It’s been an education and a process of finding partners who shared our vision and passion for the industry. Our vision is to build an international company that becomes a fundamental building block for cloud native applications.

First and foremost we’d like to thank our two seed investment partners, Index Ventures and Crane. They have provided the support we needed to grow and have embraced our vision and appreciated our journey and DNA.

The people at these firms have become part of the TriggerMesh family and we’ll be forever grateful for your confidence in us and our company. We actually had quite a bit of interest from the venture capital community but it was hard to match the enthusiasm of Erik Stadigh from Crane, an early-stage investor out of London. His enthusiasm for our vision and tenacity led us to decide no matter who else came along that we wanted to be in business with him, Scott Sage, and the rest of the Crane team.

Index Ventures was also exceptional in their insights and support of our vision. I had good success at Cloud.com where they were an early investor. We also knew they were experts in the infrastructure management space with the likes of Elastic, Confluent, Kong, and many others. When we met Ari Helgason, Erin Price-Wright, Mike Volpi, and Neil Rimer we were sold on having them as part of the TriggerMesh family. Their network and experience have been assets already and we look forward to a long fulfilling relationship with them.

Thank you for your support

No one who achieves success does so without acknowledging the help of others. The wise and confident acknowledge this help with gratitude.

We want to thank so many of those people who supported us. I can’t imagine having gotten here without the support of my partner and friend, Sebastien Goasguen. He’s one of the most decent, loyal standup people I have met in my life. We also owe thanks to a long list of folks who helped us along the way.

And so many more people that have helped us get this far including our friends and family.

We plan to grow our team internationally and create the foundation we need to develop our products and grow as a company. We also plan to have fun doing it. This year we plan to put the finishing touches on our platform with the help of our early adopters to help us better define our use cases. If you are looking to grow your cloud native footprint or need help integrating your existing infrastructure we hope you’ll take a look and help us grow.