What Every CIO Needs to Know about Serverless, Part 2 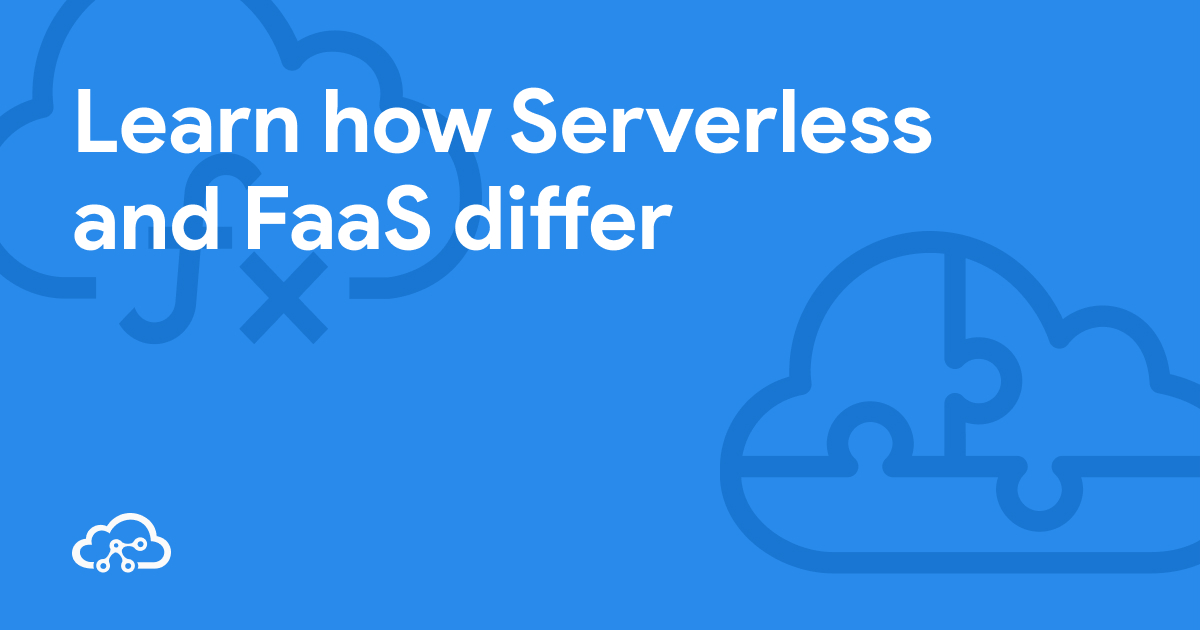 This series of blogs “What Every CIO Needs to Know about Serverless” is designed to help bring clarity and sanity to the sometimes confusing world of serverless. In Part 1 we covered why serverless matters to your digital transformation strategy and we introduced a couple basic concepts.

Here in Part 2, we are breaking down the difference between serverless, Functions as a Services (FaaS), and Knative. The similarities and differences between these terms and approaches has been a source of lots of discussions and confusion. We doubt we’ll settle it all in a single blog, but we hope at least it will make your life easier.

Serverless computing refers to the concept of building and running applications that do not require server management. It describes a finer-grained deployment model where applications, bundled as one or more functions, are uploaded to a platform and then executed, scaled, and billed in response to the exact demand needed at the moment.

Serverless computing does not mean that we no longer use servers to host and run code; nor does it mean that operations engineers are no longer required. Rather, it refers to the idea that developers no longer need to spend time and resources on server provisioning, maintenance, updates, scaling, and capacity planning. Instead, all of these tasks and capabilities are handled by a serverless platform and are completely abstracted away from the developers and IT/operations teams.

Notable characteristics of serverless computing include:

OK, So What about FaaS?

Serverless is often equated with Function as a Service (FaaS) offerings like AWS Lambda. We believe serverless is much more than FaaS. A FaaS platform lets users write small pieces of code that get executed when an event happens. The platform transparently takes care of provisioning the runtime, auto-scaling and security.

FaaS can be thought of as the glue that connects cloud services together and that gets executed when certain events happen. Serverless enables developers to focus on applications that consist of event-driven functions that respond to a variety of triggers. FaaS platforms take care of the rest – such as trigger-to-function logic, information passing from one function to another function, auto-provisioning of container and run-time (when, where, and what), auto-scaling, identity management, etc.

How Does Knative Fit In?

Knative is an open source serverless platform that provides a set of middleware components to build modern, source-centric, and container-based applications that can run anywhere: on-premises, in the cloud, or even in a third-party data center.

In his excellent talk at NDC London 2020, Google Developer Advocate Mete Atamel describes Knative as helping to resolve a previous tradeoff developers had to make between serverless OR containers. With Knative, you get both – the flexibility of containers with the zero-touch provisioning and fast iteration of serverless.

Knative Serving defines a set of objects as Kubernetes Custom Resource Definitions (CRDs). These objects are used to define and control how your serverless workload behaves on the cluster.

Service: The service.serving.knative.dev resource automatically manages the whole lifecycle of your workload. It controls the creation of other objects to ensure that your app has a route, a configuration, and a new revision for each update of the service.

Route: The route.serving.knative.dev resource maps a network endpoint to one or more revisions.

Configuration: The configuration.serving.knative.dev resource maintains the desired state for your deployment. It provides a clean separation between code and configuration and follows the Twelve-Factor App methodology.

Revision: The revision.serving.knative.dev resource is a point-in-time snapshot of the code and configuration for each modification made to the workload.

Any producer (or source), can generate events before there are active event consumers that are listening.

Any event consumer can express interest in an event or class of events, before there are producers that are creating those events.

As of v0.5, Knative Eventing defines Broker and Trigger objects to make it easier to filter events.

Knative Eventing also defines an event forwarding and persistence layer, called a Channel. Each channel is a separate Kubernetes Custom Resource. Events are delivered to Services or forwarded to other channels (possibly of a different type) using Subscriptions. This allows message delivery in a cluster to vary based on requirements, so that some events might be handled by an in-memory implementation while others would be persisted using Apache Kafka or NATS Streaming.

Tekton is a Kubernetes-native open-source framework for creating continuous integration and delivery (CI/CD) systems. It lets you build, test, and deploy across multiple cloud providers or on-premises systems by abstracting away the underlying implementation details.

Tekton is one of the initial projects in Continuous Delivery Foundation (CDF) with 25+ members which serves as a governing body for fast-growing CI/CD projects to encourage and sustain vendor-neutral collaboration and participation.

A Little About Us

To bring today’s enterprise applications into this future, the TriggerMesh cloud native integration platform ties together cloud computing, SaaS, and on-premises applications. We do this through an event-driven cloud service bus that connects application workflows across varied infrastructures.